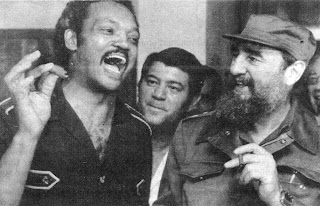 It turns out that Communism isn't color blind, after all. Indeed, far from eradicating racism in the island paradise, the Castro government has gone to great lengths to protect and promote it. Here are a couple of influential voices taking on the issue in an important series, "Race in Cuba," over at The Root.

...Cuban society was thus built with a strict code in which skin color placed human beings in certain social classes and even within varying degrees of humanity: Black, in many cases, was synonymous with beast.

"The black problem" is so fundamental, the matter of ethnic origin among the island's inhabitants so dramatic, and racism so persistent among those with decision and economic power that Cuba's independence from the Spanish empire was delayed by almost a century precisely because of its large number of blacks. (At certain points in the 19th century, blacks made up 60 percent of the resident population.) They were a people who had been exploited and who, in a moment of institutional disorder, it was feared might try to vindicate their rights and their humanity, as had happened in the neighboring colony of Saint Domingue...

The curious, contradictory and painful part is that various historians and sociologists also agree that the persistent "black problem" is still with us today, in the 21st century, urgently and tensely waiting for a definitive solution that never comes, in spite of laws, decrees and official edicts that paternalistically (but that are, deep down, racist) try to stipulate ethnic representation in certain affairs of state, government and the Communist Party. As if a few more dark faces in the official apparatus could really be an answer to the profound problems that have so much to do with economics and social thought and so little to do with the utopian volunteerism of our leaders who, in the end, are simply practicing politics with their "anti-discrimination" decrees.

The painful truth is that, in Cuba, the vast majority of the prison population is black or mixed-race. The most physically ruined parts of the cities are those where most black and mixed-raced Cubans, weighed down by spiritual burdens and secular misery, have lived for generations. They are also the ones who, in the economic and social climbing of the last few decades, are least represented ... and let's not mention certain attitudes, repressive attitudes -- in other words, the attitude of the Cuban police, where blacks are mostly concentrated at the bottom of the pyramid -- that treat dark-skinned persons with much greater rigor ... precisely because of the color of their skin...

(Leonardo Padura, Cuba's best-known novelist, is the three-time recipient of the Dashiell Hammett Award given by the International Association of Detective Writers.)

The letter signed by 60 African Americans about the state of racism in Cuba, which ended decades of silence on Cuba's racial policies, was the first shot...

The exclusion of blacks from the halls of power and from the most advantageous economic sectors can be explained in part by the historical consequences of slavery and the inequalities of the black and mulatto population to whites in the first years of our socialist project, but it is no longer justifiable.

Other things -- such as the near total absence of textbooks at all levels of learning about the history and culture of Africa and of blacks in Cuba, continued emphasis of European aesthetic values, the degrading representation of black and mulatto women in touristic propaganda and police harassment -- continue to batter the self-esteem of the country's population of color...

(Inés María Martiatu Terry is a Cuban writer and cultural critic whose many books include Over the Waves and Other Stories, published in the United States. She has received various awards, including the Ministry of Culture's distinction for national culture.)
Posted by DH at 11:00 AM