Barack Obama Bemoans the "Reptilian Side of Our Brain" 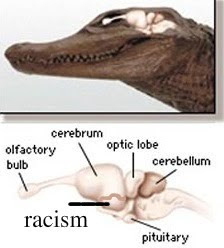 If it were not for a fawning press, the long progression of preposterous claims, the gaffes, the glaring inefficiency, the secrecy and the outright lies told by Barack Obama would have finished him.

But as it is, even Obama's pitiful performance on ABC's insipid talk show “The View” is being glossed over if not ignored altogether.

For instance, imagine the howl from the media if a Republican would have called black Americans "a mongrel people." Instead, Sam Youngman from The Hill has the president's back. "The president did not appear to be making an inflammatory remark with his statement. The definition of mongrel as an adjective is defined as 'of mixed breed, nature, or origin,' according to dictionary.com."

Obama also took occasion on the program to blame others for the firing of Shirley Sherrod. The president, as we all know by now, is quite good at shrugging responsibilities off onto others. Even as he can take credit for things that he's had nothing to do with it. The ladies on "The View" dutifully accepted the President's story.

As they did this whopper: "My hope is that I've tried to set a tone in the debate that says, 'Look, we can disagree without being disagreeable.'" This from a politician who regularly denounces the motives of everyone who dares stand in his way. This from one of the most polarizing partisans of the modern era. It's laughable -- except to the president's staunch defenders in the Fourth Estate.

And one more from Obama's "charming" TV appearance, a statement in which he managed to accept not only the wildest distortion of evolution but also disparage all humanity as inherently racist. "Obama noted 'there's still a reptilian side of our brain' that leads people to not trust others 'if somebody sounds different or looks different.'"

As I suggested before, were a conservative to make such a doofus remark, his or her career would be ended forthright. Remember Dan Quayle's alternate spelling of potato? But because it was made by an arch-liberal, it will slip by with nary a word of protest let alone alarm.