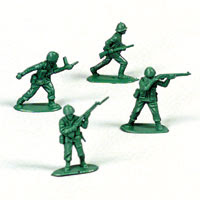 You may have already heard about the elementary school kid in Rhode Island who got in trouble over taking Army men to school. No, not real soldiers -- just those little plastic figures that most boys grow up with.

David Morales is an 8-year old kid whose class was told to make hats to wear for a special event. So the kid creatively (and patriotically) decorated a camouflage ball cap with an American flag and a few of those little "Army guys" from his toy box. But because those tiny figures have tiny guns, the school district's zero-tolerance, no-weapons policy was considered violated. And David's hat was sent home.

The oh-so-tolerant school officials suggested the cap would have been acceptable had David used army men that weren't carrying guns. You know, like that one with the radio. But wait a second; if I remember my own misspent youth correctly, even that guy sported a sidearm in a holster.

The superintendent added, "Nothing was being done to limit patriotism, creativity, other than find an alternative to a weapon." Yeah, doggone it. Maybe David could have got a knife and cut off the rifles, the pistols, the grenades and put those damaged soldiers on his cap. Would that have satisfied school officials?

No kid; you just forget American history as well as completely ignore what our troops (our armed troops) are today being required to do in Iraq and Afghanistan. You be as patriotic as you want to be, David, as long as you operate in that weird sense of unreality that public school administrators live in.

And if Superintendent Di Pietro hasn't offended you yet, note the parallel he used to justify the school policy. He pointed out that the school district has a zero-tolerance policy about decorations of illegal drugs too. For instance, he explained that they wouldn't allow a kid to wear a shirt emblazoned with a marijuana leaf.

Hmm. Comparing a socially-destructive drug plant to a hat decorated with figures of U.S. combat soldiers?

Only in the mind of a liberal.

But there is some sanity in the story. For Lt. Gen. Reginald Centracchio, adjutant general emeritus of the Rhode Island National Guard, asked for a meeting with school officials and they agreed to a conversation. Warren Mass describes what happened:

Centracchio praised the Coventry school district for supporting the military in the past, including sponsoring a junior ROTC program, but he took exception to the decision to ban the cap. He also expressed hope that the incident would provide an opportunity for the distrcit to review its policies. "The American soldier is armed. That's why they're called the armed forces," said Centracchio. "If you're going to portray it any other way, you miss the point."

And as for David Morales? Centracchio presented him with a medal for his patriotic efforts in honoring America and her armed forces by making that cap. He also gave him a certificate allowing David to call himself an honorary brigadier general.

Of course, this isn't the only outrage of this kind happening in the government schools. Mass describes another ugly incident involving hos own grandson.

Earlier in the school year our grandson was sent to the principal’s office of his Rowlett, Texas, elementary school for engaging in the “dangerous” act of actually drawing battle scenes involving tanks and other military armaments. The principal thought this drawing was dangerous enough to confiscate as contraband and sent Kyle to the school’s counselor. (Incidentally, Kyle has a remarkable knowledge of World War II history, being able to name most of the conflict's major battles and participants.)

Probably contributing to this young lad’s admiration for the military is the fact that his father served in the U.S. Marine Corps and currently is a civilian technician working at Kirkuk Air Base in Iraq. The school’s administration, obviously, does not share in this respect for our nation’s armed forces.

This is modern day public education, folks. They demand more and more of your tax dollars while teaching your kids less and less of what you'd like them to learn.
Posted by DH at 2:44 PM