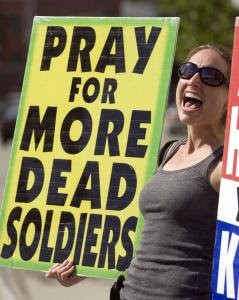 It hasn't received much press but I thought you should know that Shirley Phelps-Roper, one of the leaders of the Westboro Baptist Church which, among other things, pickets the funeral processions for American soldiers killed in combat, has lost her latest legal action against Nebraska Dave Heinemen and the Nebraska Funeral Picketing Law.

As you may remember, that law was specifically designed to prohibit protests of the kind organized by Westboro Church -- protests that are ugly, sophomoric and remarkably hateful.

District Judge Laurie Smith Camp denied Phelps-Roper's motion for a preliminary injunction of the law. "The Nebraska Funeral Picketing Law is narrowly tailored to serve a significant government interest, i.e., the protection of family members attending funeral and burial services, and leaves ample alternative channels for Phelps-Roper's communications that are protected by the First Amendment. She has not demonstrated that she is likely to prevail on the merits of her facial or as-applied challenges to the statute, and her motion for preliminary injunctive relief will be denied."

The full case document can be read here.
Posted by DH at 10:37 AM