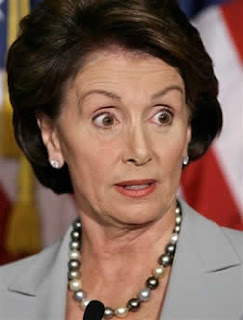 It's a piece of good news.

The support for the Democrats far-left effort to increase the burdens on free speech (H.R. 5175, called the DISCLOSE Act) fell apart in recent days despite the bizarre efforts of Nancy Pelosi to exempt certain organizations from the law's effects.

Pelosi was willing to let the AARP and the Humane Society go on as usual with running TV ads or sending out mass mailings in the final months of an election without requiring them to disclose their top donors. Under pressure from certain Congressmen in the South and West, the Speaker was forced to even exempt the National Rifle Association. But the law would throw these burdens on pro-life groups and other issue-oriented organizations.

Unbelievable. Do the words "unfairness," "discrimination," or "selective persecution" mean nothing to Democrat leaders?

Apparently not. But they do mean something to the U.S. Chamber of Commerce who opposed this outrageous legislation. And to the National Federation of Independent Business, National Right to Life and hundreds of other groups who exist to give voice to their members' interests. And they meant something even to the Washington Post whose Cleta Mitchell penned yesterday,

The cynical decision this week by House Democrats to exempt the National Rifle Association from the latest campaign finance regulatory scheme is itself a public disclosure. It reveals the true purpose of the perversely named Disclose Act (H.R. 5175): namely, to silence congressional critics in the 2010 elections.

The NRA "carve-out" reaffirms the wisdom of the First Amendment's precise language: "Congress shall make no law . . . abridging the freedom of speech."

Congress can't help itself. Since 1798, with the Alien and Sedition Acts, incumbent politicians have yearned for legal duct tape for their opponents' mouths. The Disclose Act is a doozy of a muzzle.

With such coverage -- and with Congressmen getting an earful from back home about this obviously unjust bill -- the support for it crumbled. By early this week, even the Black Caucus wanted it pulled.

Pelosi had no choice.

Not that the bill is quite dead. She is promising to bring it back, possibly as early as next week, but the "disclosure" of the horrendous (and starkly unconstitutional) intentions of the DISCLOSE Act make its passage doubtful.