One Man's Oily Mess is Another Man's Opportunity 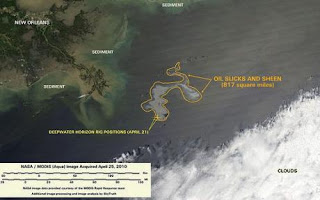 Nine days after the British Petroleum's Deepwater Horizon oil rig blew apart and began shooting 5,000 barrels of oil a day into the Gulf of Mexico, the massive oil slick began to wash ashore late last night. Many environmental experts are saying it could end up creating far more damage than the infamous Exxon Valdez oil spill in Alaska.

And the political damage could also be substantial...or not.

Joseph Curl, writing in the Washington Times, suggests that failure to get a firm hold on the crisis "could pose the same kind of political threat to Mr. Obama's popular standing that the much-criticized handling of the aftermath of Hurricane Katrina did for former President George W. Bush."

Curl writes that "Mr. Obama's response to the disaster will be closely scrutinized for parallels to the response of Mr. Bush to the devastating Hurricane Katrina" but I don't think so. The media's ongoing loyalty to Obama will likely result in the same kinds of excuses, cover ups, omissions and pointing the blame elsewhere that we've come to expect.

No, I would expect that Team Obama (never at a loss to exploit a crisis) will simply use this to further bash big oil, to refuse to develop America's energy independence and to remind the country that the Democrats (though certainly "oily" in a metaphorical sense) have their hands completely clean on this one.
Posted by DH at 11:16 AM