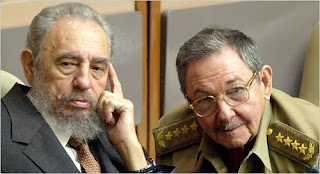 This is how fast "justice" works in the worker's paradise of Fidel Castro.

A woman is accused of striking her 23-year old daughter, a daughter with whom she has had many arguments in the past. A key cause for their strife is whereas other members of the family are pro-Castro, the mother is a blogger who has written of the brutal dictatorship under which Cubans live and who has marched alongside the Ladies in White, those mothers, wives and sisters of Cuban men who were unjustly rounded up and imprisoned during the Black Spring of March 2003.

Within 2 days, Dania Virgen García was tried, convicted and shoved into Manto Negro, the country's notorious prison for women, to serve a 20 month sentence!

The daughter's response? She believes her mother was properly sent to jail and hopes that after experiencing life in "the black veil" (the street name for the infamous prison), her mother will stop her dissident activities.

A simple case of domestic disquiet? Hardly. The Wall Street Journal editors call it "the clearest sign to date of the regime's desperation in the face of popular discontent."

Here's more from the Wall Street Journal and the Miami Herald.
Posted by DH at 10:37 AM