The U.N.'s Cruel Farce: Iran "Elected by Acclamation" to Commission on the Status of Women 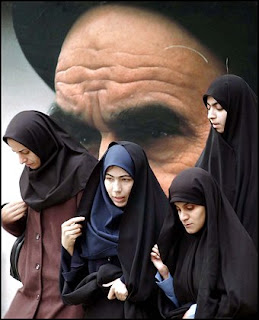 "Without fanfare, the United Nations this week elected Iran to its Commission on the Status of Women, handing a four-year seat on the influential human rights body to a theocratic state in which stoning is enshrined in law and lashings are required for women judged 'immodest.'" (From the Fox News exclusive story.)

There's almost nothing to say about this incredible, revolting action of the U.N.

Screaming, fainting, laughing or mindless denial -- those are clearly more natural responses than trying to put into words one's response to this horrifying farce.

But bravely, Joseph Abrams from Fox News manages the task. His report continues (and please note it is the only major news organ covering this huge story)...

Buried 2,000 words deep in a U.N. press release distributed Wednesday on the filling of "vacancies in subsidiary bodies," was the stark announcement: Iran, along with representatives from 10 other nations, was "elected by acclamation," meaning that no open vote was requested or required by any member states — including the United States...

The U.S. Mission to the U.N. did not return requests for comment on whether it actively opposed elevating Iran to the women's commission.

Iran's election comes just a week after one of its senior clerics declared that women who wear revealing clothing are to blame for earthquakes, a statement that created an international uproar — but little affected their bid to become an international arbiter of women's rights.

The letter draws a dark picture of the status of women in Iran: "women lack the ability to choose their husbands, have no independent right to education after marriage, no right to divorce, no right to child custody, have no protection from violent treatment in public spaces, are restricted by quotas for women's admission at universities, and are arrested, beaten, and imprisoned for peacefully seeking change of such laws."

The Commission on the Status of Women is supposed to conduct review of nations that violate women's rights, issue reports detailing their failings, and monitor their success in improving women's equality.

Yet critics of Iran's human rights record say the country has taken "every conceivable step" to deter women's equality.

"In the past year, it has arrested and jailed mothers of peaceful civil rights protesters," wrote three prominent democracy and human rights activists in an op-ed published online Tuesday by Foreign Policy Magazine.

"It has charged women who were seeking equality in the social sphere — as wives, daughters and mothers — with threatening national security, subjecting many to hours of harrowing interrogation. Its prison guards have beaten, tortured, sexually assaulted and raped female and male civil rights protesters."
Posted by DH at 11:48 AM