The New Cuba Is the Old Cuba 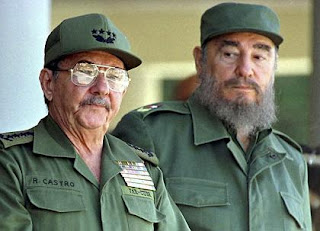 A couple of reports from that island paradise run by the brothers Castro...

The first is an example of "We will get to you by getting to your family" -- a method used by thugs throughout history. In this particular case, Castro's Communist police have trumped up prostitution charges against the daughter of a known dissident. Carmen Bermúdez Arrieta watched her 25-year old daughter sentenced to two years in the Red Flag internment camp in Güira de Melena, a cruel injustice designed by authorities as a reprisal for Carmen's involvement with the Cuban Liberal Movement, a group that frequently opposes Communist policies.

In the second, a 65-year old street vendor was fined and threatened by police for selling chili peppers without a license. Roberto García paid the 60 peso fine (no small amount to him) but was warned that the next time he was caught, his bicycle would be confiscated. "I have a small garden and I sell what I grow," he said. "With the little that I earn, I pay for the electricity and I buy food. I'm not hurting anybody."

Nothing but the cause of world socialism, Roberto. And we can't have that.

(Story from the Miami Herald via Spanish language reports from www.cubanet.org)
Posted by DH at 9:51 AM