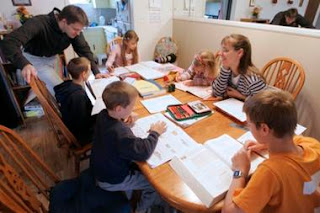 In Germany (as in Sweden too) parents who would like to educate their children at home cannot do so without breaking the law. That's how far Statism has gone in those two countries. And, with the case of German police forcibly removing the children of Uwe and Hannalore Romeike from their home and that family's subsequent request for political asylum in the United States, this despicable totalitarianism was exposed to the world.

Federal immigration judge, Lawrence O. Burman, determined that the Romeikes had a reasonable fear of persecution for their beliefs if they returned to Germany. Indeed, he frankly described the German Government’s actions as “repellent to everything we believe as Americans." The German government, he said, was denying the family “basic human rights" and it's intolerance of home-schoolers (severe fines, threats of further criminal prosecution, taking their children away) amounted to nothing less than persecution.

With the German government's absurd claims that home-schooling is unsocial, dangerous and leads to the creation of "parallel societies," their enraged reaction to Judge Burman's decision was to be expected. The Nanny State wants absolutely no competition to its tyrannical rule -- not business, not the Church, not the family, and not even the individual. It is the attitude of Statists everywhere.

Therefore, I'm saddened but not at all surprised that the radical socialists which make up Team Obama are aggressively protesting Judge Burman's decision.

They want to send the Romeike family back.

It is a very troubling development, one that portends grave problems for the future of America's home-schooling families, that the United States Government Agency for Immigration and Customs Enforcement has issued an appeal of Judge Burman’s grant of asylum to the Romeike family. In that appeal, the U.S. government is calling homeschoolers too “amorphous” to be a “particular social group” and that “United States law has recognized the broad power of the state to compel school attendance and regulate curriculum and teacher certification” as well as the “authority to prohibit or regulate homeschooling.”

If this was a movie, it would now be time to start booing the villains.

The Home School Legal Defense Association's Michael Donnelly said he too was not surprised by the actions of ICE or the arguments they presented. “It is disappointing but not surprising that ICE has appealed,” Donnelly said. “Judge Burman appropriately noted that homeschooling is legal in all fifty states, and his decision reflects U.S. law which upholds the right of parents to direct the education and upbringing their children as an enduring American tradition, entitling the family to protection from persecution. ICE argues that Germany’s denial of a parent’s right to homeschool for any reason is acceptable. It is shameful that ICE, and by extension the U.S. Government, supports the persecution of German homeschoolers.”

(Above photo taken from Christian Science Monitor story.)
Posted by DH at 10:02 AM