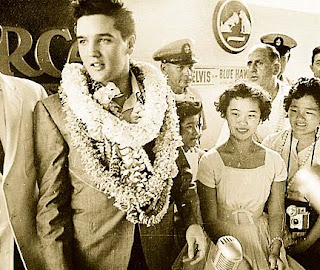 To hit a lighter note as you prepare for the weekend, here's an item I wrote yesterday for my Facebook page:

On this date (March 25) in 1961, Elvis Presley performed his first concert after being discharged from the U.S. Army. It was a benefit concert to help build the USS Arizona Memorial at Pearl Harbor in Hawaii.

Though held at the relatively small Bloch Arena (situated near the Pearl Harbor entrance) and with general tickets selling for only $5 at such outlets as Sears stores, Presley raised an incredible $54,678.73 towards the Memorial (The National Park figure.)

But it wasn't just the money, Elvis' electrifying concert (the first he'd done in over two years) was a major factor in kick-starting public interest in what had become a stalled project. Furthermore, it was a concert whose very idea originated with he and Colonel Tom Parker.

The show began with Minnie Pearl, the beloved star of the Grand Ol' Opry, and then onto the stage came Elvis with his complete troupe, including D.J. Fontana on drums, Scotty Moore on guitar and the Jordanaires as his backup singers. All the proceeds went directly to the U.S.S. Arizona Memorial project. Elvis and the others performed for free. Not a dollar was withheld even for expenses.

The reason that Elvis was in the Islands was to begin filming of a film whose working title was "Waikiki Beachboy." Fortunately, they ditched that title and went with "Blue Hawaii" instead.

Though items relating to Elvis' momentous fund-raising, awareness-raising concert can be found in the Memorial's archives, there is no mention of the event at the Memorial itself or even the visitors' center. But that's the way it should be. For the USS Arizona Memorial is a tribute to the memories of the battleship's 1,177 crew who, on December 7, 1941, gave the ultimate sacrifice in behalf of the country's freedom.

Still, particularly on this date, I thought it worthwhile to mention the generosity and patriotism of Elvis Presley -- virtues which played no insignificant part in the Memorial's creation. Elvis had, as you remember, volunteered for the Army. And it is moving to see how his pride in America and his desire to honor it's ideals and heritage remained strong after his military service.

For more information on the USS Arizona and the Memorial, see this web site.
Posted by DH at 8:57 AM