Drunk Driving a Truck AND a Horse? 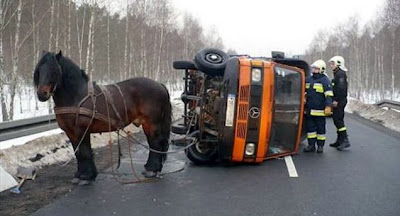 62-year-old Polish farmer Leszek Stepien's problems began when he drank too much. Then, when he couldn't get his truck started, he hitched it to his horse to tow the truck to the garage.

But he was still too soused to steer the truck properly. He swung into the opposite lane of traffic, almost hit a car, over-corrected and ran into the guardrail. The truck then flipped onto its side.

No one was hurt, particularly the bemused horse, even though Stepien emerged screaming at the creature, "This is all your fault."

The police saw it differently, though. Stepien was arrested and charged with driving under the influence. The horse went free.
Posted by DH at 11:39 AM