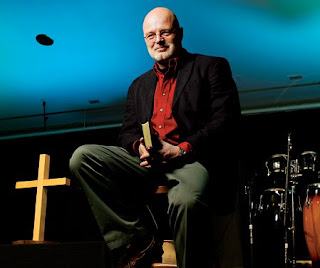 I've referred on a few occasions here on Vital Signs Blog to the naive political liberalism and, much worse, the theological heresies of best-selling religious writer Brian McLaren. (To review just type in McLaren in the Search feature at the upper left of the page.)

Well, here are a few fresh quotations from McLaren's latest book, Everything Must Change. I take them from an enlightening review of the book by Rev. Gary Gilley pastor of Southern View Chapel in Springfield, Illinois.

* Says McLaren: “The Bible is the story of the partnership between God and humanity to save and transform all of human society and avert global self-destruction.” And, “Jesus came to launch an insurgency to overthrow that occupying regime. Its goal is to resist the occupation, liberate the planet, and retrain and restore humanity to its original vocation and potential.”

* In order to promote his new emerging agenda it is necessary for McLaren to reject many, if not most, of the major doctrines held dear by the historic evangelical church, for it is these very doctrine, in his opinion, that have caused the global mess in which we find ourselves. McLaren claims [for instance] Christ’s cross work was not for the purpose of propitiating divine wrath or redemption from sin; it was a nonviolent example for us to follow. (Pages 158-159 of Everything Must Change.)

* The second coming of Christ is without biblical warrant “for it leads us to believe that in the end, even God finds it impossible to fix the world apart from violence and coercion [therefore] no one should be surprised when those shaped by this theology behave accordingly” (p. 144). A new heaven and earth are unnecessary because “good will prevail by peace, love, truth, faithfulness, and courageous endurance of suffering.” (Page 146.)

* The need for forgiveness and salvation from sin are not on the agenda because most, if not all, are already citizens of the kingdom by virtue of having been created in the image of God. (Page 223.) The greatest problems facing mankind have to do with physical concerns of the planet, not spiritual issues. (Page 46.)

* Hell is not a literal place of judgment for rebels against God but starts on earth now when we don’t live for the kingdom of God, as described by McLaren. (Page146.)

* Gilley concludes, "When the author turns to Scripture in an attempt to support his views it is an exercise in distortion. McLaren resorts to several methods: changing the meaning of words to suit his preference (pp. 96, 99, 113), ignoring Scripture he does not like (e.g. concerning the second coming, pp. 144-146), or simply twisting the meaning beyond all recognition (pp. 97, 107, 111, 135, 137, 144-145, 177, 238-241). All of this would be laughable if it was not so serious. Without question, McLaren cannot reconstruct Jesus, the gospel and Christianity if he faithfully interprets the Scriptures with any sane method of hermeneutics. But if his readers are willing to ignore this fact then some will be taken in by the message of Everything Must Change.

From a social/political angle McLaren might be described as the Michael Moore (ultra-liberal film producer) of Christianity..."

(Thanks to Doug Nichols for alerting me to this review.)
Posted by DH at 11:49 AM