Christians, Deists, Agnostics -- Just Who Were Our Founding Fathers? 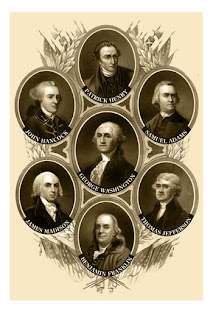 ...Two recent books edited by Daniel Dreisbach, Jeffry Morrison, and Mark David Hall -- The Founders on God and Government and The Forgotten Founders on Religion and Public Life -- carefully explained the religious backgrounds, convictions, and contributions of numerous founders. They show that many who played leading roles in the nation’s Declaration of Independence, the Continental Congress, and the devising and ratification of the Constitution were devout Christians, as evident in their church attendance, commitment to prayer and Bible reading, belief in God’s direction of earthly affairs, and conduct.

Even many of those often labeled as deists—Washington, Franklin, Adams, Jefferson, Madison, and Alexander Hamilton—do not fit the standard definition of deism...

All of these founders, however, repeatedly discussed God’s providence and frequently affirmed the value of prayer. Their conviction that God intervened in human affairs and directed history has led some scholars to call these founders “warm” or “enlightened” deists, but these terms seem like oxymorons. A better label for their position is theistic rationalism.

As Professor Gregg Frazer explains, this hybrid belief system combines elements of “natural religion, Protestant Christianity, and rationalism—with rationalism as the controlling element.” Those espousing this perspective believed in a powerful, benevolent Creator who established the laws by which the universe operates. They also believed that God answered prayer, that people best served Him by living a moral life, and that individuals would be rewarded or punished in the afterlife based on their earthly deeds. Only a few founders, most notably Thomas Paine and Ethan Allan, can properly be called deists...

Read Gary Scott Smith's entire Breakpoint commentary here. Terrific stuff -- and not what your kid is likely hearing from his public school teacher!
Posted by DH at 11:18 AM