"There Are Things That Only Oprah and God Can Make Happen." 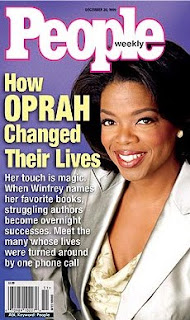 That's the theological view of Chicago Sun-Times columnist Mary Mitchell. In her gushy piece yesterday, bizarre even for Ms. Mitchell's dim-witted celebrity-adoring readers, we were told:

* "There is no use speculating on who will take her place. There will not be another Oprah. She is an original. Her authenticity drew the world to her."

* "Even in the early days, Oprah seemed bigger than Chicago."

* "Oprah is a cultural phenomenon."

* "Oprah's talk show may be coming to an end. But her power and influence are here to stay."

* And, of course, the pièce de résistance: "You might not think you're going to miss Oprah, but you are. There are stories that only Oprah can do, and there are things that only Oprah and God can make happen."

And, by the way, apparently among the upcoming "stories that only Oprah can do" are a series of sweet little tales about a sexual adventuress, a repressed housewife who suddenly walks out on her husband and children and slides in to the "seamy underbelly" of Los Angeles in order to act out her various fantasies. Variety, the New York Post and others are all over the story, describing the HBO series produced by Winfrey's Harpo Productions as a departure from the talk show diva's usual shtick.

Wilson says the lead character, Georgia, has "something boiling up in her" when she decides to chuck her suburban existence and embrace her funky new life. "It just happens and she splits. It may be shocking to her, but the table has been set for a long time," said Wilson...

But then she adds, "Georgia will embrace darkness with a joyful spirit."

A self-centered sexual predator but with an uplifting, New Age joy amidst her decadent pursuits? Maybe this series isn't much different from an Oprah talk show episode after all.
Posted by DH at 6:55 AM