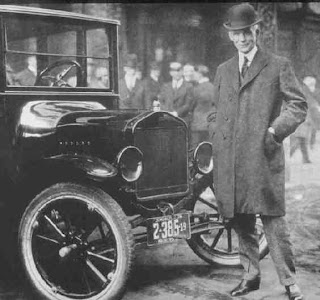 That's Henry Ford as quoted in an interview with the Chicago Tribune in 1916. And, of course, the portion of that quote which has gone down in...uh, history is the first line.

But it is actually the last line that is the most relevant to modern culture for the progressive powers that be are determined to not only escape every "shackle" of Western civilization's past, they are committed to ignoring history, distorting history, and even inventing history to suit ideological ends.

A case in point from today's headlines is the move of European Union tyrants to re-write their own history -- and then force feed the corrupt concoction to the school children of every country it dominates. But, as Christopher Booker notes in the Telegraph, there are willing dupes within Great Britain's educational establishment who will welcome the scheme, dedicated as they already are to dispensing with real history so they can re-make it in their own image.

The latest initiative by our "Children's Secretary", Ed Balls, is to abolish what remains of fact-based teaching of history and geography in our schools. He plans to "roll them together into themed lessons on social issues such as global warming" (funny how that seems to seep into everything nowadays).

The ruthless drive of educational progressives to eliminate history-teaching from schools has been under way since the 1960s. The aim is to ensure that children know nothing about their country's past or how the world came to be as it is, leaving their minds blankly open to whatever vacuous progressive claptrap is fed to them.

In his desire to chuck history onto what Lenin called "the scrapheap of history", Mr Balls may have to make an exception, however. A campaign is now being mounted in the European Parliament to make it compulsory for children to be taught the history of the EU. According to Mário David, the Portuguese MEP leading the campaign and a former chief of staff to the Commission President Jose-Manuel Barroso, it Is vital to counter all the "lying, cheating and mistrust" that surrounds the EU in the minds of the peoples of Europe. Our children must therefore be indoctrinated accordingly.

A year or two back, when Richard North and I were writing a comprehensive history of "the European project", The Great Deception, we were astonished to find just how horrendously misleading is the account of that history peddled by the EU itself on its Europa website. From laying claim to Churchill as father of the EU to consistently obscuring the nature of the key role played by Jean Monnet, they have come up with an official version of the origins of their "project" which bears virtually no relation to the facts. Doubtless this is just the sort of history which Mr Balls will be happy to allow in our schools – because "fact-based" it isn't.
Posted by DH at 6:21 AM