Are We Living in Jimmy Carter's Second Term? 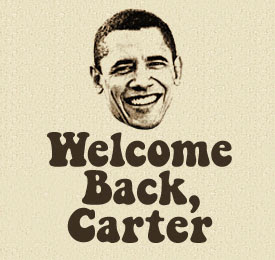 An idealistic president takes office promising an era of American moral renewal at home and abroad. The effort includes a focus on diplomacy and peace-making, an aversion to the use of force, the selling out of old allies. The result is that within a couple of years the U.S. is more suspected, detested and enfeebled than ever.

No, we're not talking about Barack Obama. But since the current administration took office offering roughly the same prescriptions as Jimmy Carter did, it's worth recalling how that worked out...

There are a lot of illuminating reminders in this fine Bret Stephens piece for the Wall Street Journal. And even if those "moderate" Democrats fail to read it and learn from it, you certainly shouldn't.
Posted by DH at 12:21 PM