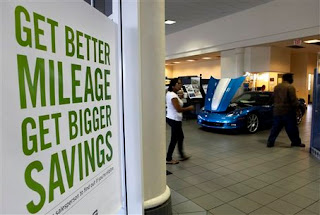 Should anybody have been surprised that when the government poured a billion dollars into that public trough called the "Cash for Clunkers" program there would be a greedy run on the money?

Yep, that billion dollars and then some is already gone. (It took just 6 days!) But some politicians are now insisting the government give yet more.

"If they can't administer a program like this, I'd be a little concerned about my health insurance," car salesman Rob Bojaryn said.

For more detail, see also Conn Carroll's "Cash for Clunkers: A Case Study in Why Obamanomics Is Failing" over at the Foundry's Morning Bell. Very good.
Posted by DH at 9:41 AM