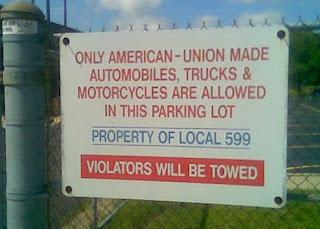 Dr. Mark J. Perry is a professor of economics and finance at the University of Michigan. At his blog site, Carpe Diem, he posted this photo as well as the cogent (and very interesting) comments.

I took this picture this afternoon about a mile from my office, at the parking lot of UAW Local 599 in Flint, on the edge of Buick City, which employed 28,000 GM workers in the 1980s and was demolished in 2002.

2. Second, what about cars built by the Canadian UAW brothers and sisters 60 miles away in Windsor, Ontario, and at other locations in Canada? Those wouldn't technically qualify as "American-Union Made Automobiles," would they?

Below is a list of vehicles from the UAW website ("Support union jobs in the U.S. and Canada") that are built by the CAW (Canadian Auto Workers); would Local 599 really tow these union-made vehicles from Canada?

3. Also listed on the UAW website are these 2009 model vehicles built in the U.S. for foreign automakers by UAW workers, would they be "American-Union Made Automobiles" or not?

4. For the Ford F-Series Pickup Truck, some 2009 models are assembled in Venezuela and Brazil, so some of those can't qualify as "American-Union Made" can they?

6. What about the Volkswagen Routan, a rebadged variant of the Chrysler RT platform, built by the CAW?