Senator for Sale: Feinstein Embarrassed When Lobbyist Tells It Like It Is 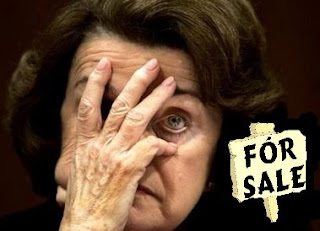 Sen. Dianne Feinstein, chairman of the Senate Select Committee on Intelligence, abruptly canceled a campaign fundraising lunch scheduled for Wednesday after the Washington lobbyist helping to organize the event suggested in an invitation that the committee's work would be served as the "first course."

Mrs. Feinstein, California Democrat, bowed Monday to concerns that the fundraising solicitation could be misinterpreted. The Senate panel she chairs has long prided itself on staying above the political fray because of the sensitive nature of its work...

Washington lobbyist Heather Podesta mentioned the intelligence committee in an e-mail invitation attached to a formal notice of the event, saying that the lunch at the upscale Charlie Palmer steakhouse in Washington would begin at noon. In the e-mail, she said donors who gave between $1,000 and $2,500 could order up "the Select Committee on Intelligence for the first course."

With a check "payable to Feinstein for Senate," the e-mail said other courses include "your choice of Appropriations, Judiciary or Rules committees," other panels on which she serves. The invitation also suggested that the recipients forward it to "others that might be interested in attending or contributing."...

The now-canceled fundraiser was scheduled to take place despite President Obama's campaign promise that the days of lobbyists setting the agenda in the nation's capital are over. He had called for a new "transparency in government."

Melanie Sloan, executive director of the watchdog group Citizens for Responsibility and Ethics in Washington (CREW), called the invitation "audacious, but legal."

"By correlating a fixed-price menu with Sen. Feinstein's committee assignments, Podesta does what most of Washington assiduously seeks to avoid -- makes clear that members of Congress are for sale," she said...

A formal invitation was attached to the e-mail and included the name of her husband, Tony, also a Washington lobbyist. Paid for by the Feinstein for Senate Committee, the attached invitation does not list any of the committees but asked potential contributors to "join" the senator for lunch.

Mrs. Podesta opened the office in January 2007 to provide "strategic advice to companies, nonprofits and individuals on how to make Washington, D.C., work for them." In the first quarter of this year, her firm has been paid $1.63 million in lobbying income, according to the Center for Responsive Politics. The firm received $4.75 million in fees last year, the center said...

Mrs. Podesta is a well-known lobbyist in Washington, and her client list includes powerful special interests with big financial stakes on issues pending in Congress. Mr. Podesta founded the Podesta Group, a lobbying and public-affairs firm based in Washington, in 1988.

(Not surprisingly, this story has no legs except those of the Washington Times. Here it is.)
Posted by DH at 9:11 AM