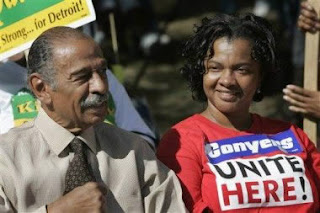 Democrat Congressman John Conyers (Detroit) chairs the House Judiciary Committee and is therefore responsible for oversight of the Justice Department -- the same Justice department that is engaged in plea bargaining with Conyers' wife, Detroit City Councilwoman Monica Conyers, who is under investigation in a big money bribery deal.

But no one seems to be bothered about this obvious conflict of interest. Not Democrats. Not Republicans. And not the press which, as it usually does with Democrats, has kept a lid on the whole smelly matter.

And one more thing -- about Conyers' promises to investigate that whole host of corruption and fraud charges against ACORN? He's suddenly, inexplicably dropped the whole thing.

He told the Washington Times reporter, "The powers that be decided against it."

Huh? A veteran Congressman, a powerhouse in his own right, doing a duck and cover because of some shadowy powers that be?

This, ladies and gentleman, is the kind of thing that will keep you awake nights. And well it should.
Posted by DH at 9:01 AM