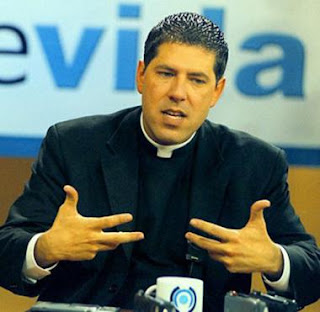 Are we sure this isn't the plot for a Hollywood movie?

A very popular Roman Catholic priest down in Miami, one who gave "relationship advice" on television shows, church radio programs and newspaper columns, is caught on camera making out with a woman on the beach. But, instead of repenting of his folly, an admission comes forth that there was more than snuggling going on.

Fr. Alberto Cutié (no jokes, please) admits there had been sexual sin and he had broken his vow of celibacy. He was then relieved of his duties at St. Francis de Sales parish in Miami Beach.

But Fr. Cutié just couldn't stay out of the public eye. So, with cameras again blinking away, tongues twittering about him, and his woman at his side, Fr. Cutié staged a very dramatic public comeback to say:

1) It wasn't my fault. No, the real blame is on the Church's arcane requirement of a celibate priesthood.

2) I'm changing collars and becoming an Anglican priest instead. In fact, I'll be preaching this weekend.

3) I'm readily available to hit the talk show circuit. (Which he has since joined in earnest.)

By the way, this Reuters report clearly sides with Cutié but is most notable for its sneering conclusion. A much different slant (and with more information) is in this report from Catholic Online, excerpts of which I print below.

"This is truly a setback for ecumenical relations and cooperation between us," said the Archbishop of the Roman Catholic Diocese of Miami, who was visibly disappointed. Archbishop John Favalora indicated that he had no communication from the Episcopal Bishop, Leo Frade of the Episcopal Diocese of Southeast Florida, who had earlier in the day received Alberto Cutié, and Ruhama Buni Canellis, the woman pictured in the photographs which catapulted this sad affair into the headlines, into the Episcopal Church.

This action by Cutie seems to have totally surprised his former Archbishop who said he had not spoken to Cutie since May 5th and was never informed by the dissident priest that he intended to marry. It also constitutes the formal renunciation of Cutie’s communion with the Catholic Church.

So the sad story of a formerly Catholic priest who broke his vows of celibacy and, after being caught by a photographer in a compromising position with his girlfriend made National and International news, has come to a schismatic and scandalous end. Cutie has formally left the Catholic Church, announced that he plans to marry the woman whom he had dated for two years, and has been accepted as a candidate for ordination into the Episcopal Church, all without his former Bishop ever even having been consulted...