Team Obama Scrambling to Get the Word Out to the Left -- Sotomayor Is With Us on Abortion! 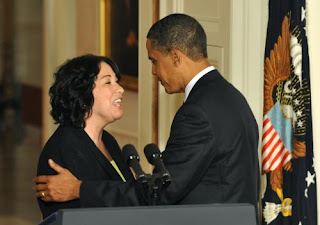 The White House scrambled yesterday to assuage worries from liberal groups about Judge Sonia Sotomayor's scant record on abortion rights, delivering strong but vague assurances that the Supreme Court nominee agrees with President Obama's belief in constitutional protections for a woman's right to the procedure...

This brief Washington Post story is interesting in once again showing how utterly batty are politicians and journalists when it comes to abortion. Certainly, no one dares face the facts about abortion: its barbarity, its frequency, its inordinately high rates among black women, its severe effects upon women and, of course, its deadly finality.

But notice how these people eerily avoid even talking about the issue. Does anyone really believe that President Obama didn't ask Sonia Sotomayor about abortion, about Roe v Wade?

And, if he didn't -- why not? For crying out loud, Roe has been the most consequential, most controversial political act of the modern era, one that has been discussed thoroughly in every venue on earth -- except, we're supposed to believe, in the conversations between a president and a prospective judicial appointment.

C'mon, Mr. President; if you talked about abortion in that Oval Office discussion with Judge Sotomayor, let's hear what you had to say. Don't be sqeamish or coy. Give us the truth.

Because if you didn't talk about abortion -- if you relied on code words, winks and nudges to reach an understanding -- it was extremely irresponsible, silly and very hypocritical.
Posted by DH at 8:12 AM