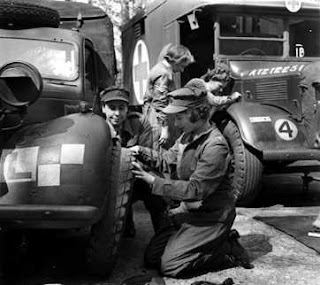 On June 6, when the contingents led by U.S. President Obama and French President Sarkozy attend D-Day commemorations at Utah Beach and the town of Ste.-Mère-Église, there will be one person notably absent, the only head of state still alive who served in uniform during World War II -- Queen Elizabeth II.

And, at being left out of the service, the Queen is not amused.

I don't blame her.

As this story in the Daily Mail emphasizes, "The failure to invite the Queen - who is head of state of both Britain and Canada - will be seen as an insult to the memory of the 17,556 British and 5,316 Canadian troops who died to free France and are buried there. The figure does not include many airmen and sailors whose bodies were never found."

The Queen volunteered as Elizabeth Windsor, serving in the Women’s Auxiliary Territorial Service as a truck driver and a mechanic. The photo above shows her changing a tire on a jeep.
Posted by DH at 9:38 AM