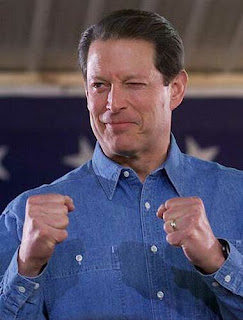 As most of you know, just over two years ago, my organization, the Tennessee Center for Policy Research, found that the knuckleheaded leader of the global warming alarmism movement, Al Gore, consumes 20 times more electricity in his home than the average American household.

Since Earth Hour was recognized today, Saturday, March 28 from 8:30-9:30pm, I thought I’d see how the hypocritical, fear-mongering former Veep was celebrating at his home.

I pulled up to Al’s house, located in the posh Belle Meade section of Nashville, at 8:48pm – right in the middle of Earth Hour. I found that the main spotlights that usually illuminate his 9,000 square foot mansion were dark, but several of the lights inside the house were on.

In fact, most of the windows were lit by the familiar blue-ish hue indicating that floor lamps and ceiling fixtures were off, but TV screens and computer monitors were hard at work. (In other words, his house looked the way most houses look about 1:45am when their inhabitants are distractedly watching “Cheaters” or “Chelsea Lately” reruns.)

The kicker, though, were the dozen or so floodlights grandly highlighting several trees and illuminating the driveway entrance of Gore’s mansion.

I [kid] you not, my friends, the savior of the environment couldn’t be bothered to turn off the gaudy lights that show off his goofy trees...

(Source: Drew Johnson, president of Tennessee Center for Policy Research. Quoted at MatthewHurtt.com)
Posted by DH at 5:53 AM