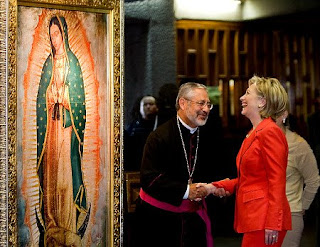 It really makes no difference whether you're a Catholic who believes that the image of Our Lady of Guadalupe was miraculously imprinted on the cloak that hangs in the Basilica in Mexico City -- or you don't. Educated persons, particularly those who have a hugely-funded staff to get the details straight like the Secretary of the U.S. State Department, should be on top of such things.

Nevertheless, in the latest bonehead move of what has become a gaffe-addicted administration, when Hillary Clinton was shown the cloak on an official visit to the church, the second most visited Catholic shrine in the world, she turned to the priest and asked, "Who painted it?"

Power Line's John Hinderaker writes, "This is one of those stories that seem like it can't possibly be true. Could America's Secretary of State really be ignorant of a central cultural symbol of a country next door? It is as though a foreign minister came to Washington, was shown Stuart's portrait of George Washington, and asked, 'Who was he?' It is hard to imagine how Clinton's staff could have prepared her for her visit without making sure she knew the story. So for now, I'm reserving judgment. It will be interesting to see whether CNS's story is confirmed and whether the State Department has any comment."
Posted by DH at 5:22 AM