The Power of Dreams, The Sharp-Edged Beauty of Life 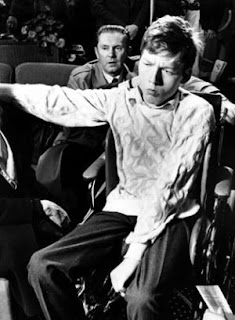 It is a story (a very real story) of dreams and genius, of courage and love, of the supernatural dignity of every human life. It is the story of one of our times' most gifted and inspirational writers, Christopher Nolan.

Wesley Smith has an entry at Secondhand Smoke dealing with the passing of the remarkably sensitive Irish writer. It shouldn't be missed.

Nor should the fuller article about Nolan which he cites. It comes from Raymond Arroyo and is right here. In fact, the paragraphs below are taken from Arroyo's column. But do read the whole thing. You'll be deeply moved.

This week the world lost a rare writer at the age of 43. He was not a media fixture and certainly not one of those writers making appearances at the literary salons. He was a Dublin homebody. But what an astounding person Christopher Nolan was.

Nolan was born with cerebral palsy, could not speak, nor control his extremities. Confined to a wheelchair, he was the type of person our society looks at with pity or largely ignores. Thankfully, his family never saw him that way. They loved him unconditionally, interacted with him and taught him as one would any child. He would go on to school, though no one fully appreciated his mental acuity.

A drug was discovered that allowed Nolan to move one muscle in his neck. (Bono of U2, who attended school with Nolan wrote the song “Miracle Drug” about the boy). At the age of 11 he was equipped with a “unicorn stick” which was fastened to his head. With it Nolan would peck at a typewriter. His mother had to apply pressure to his chin to stabilize the boy’s head, allowing him to work his art. It was a torturous process, taking him more than 15 minutes to produce one word on the page. And what words they were.

He published his first book at 15, a collection of poems appropriately titled “Dam-burst of Dreams.” His second book won Britain’s prestigious “Whitbread Book of the Year:” in 1988. It was called “Under the Eye of the Clock”...

Nolan was a Catholic, one who was often frustrated by his inability to open his mouth at communion time. But the mark of his faith is evident in his work. In Under the Eye of the Clock he wrote of Christmas: “Bells pealed in all the Dublin churches as midnight nudged home its bashful meaning to all the crazy longing. Christ the God-child now breathed a human breath. The Word became flesh and dwelt amongst man. Manger-cradled the Saviour lay. Midnight Mass marked the moment for Joseph; crested now with knowing, he marvelled at the nobility of the human person.”

His Mother, Bernadette told the Christian Science Monitor in the late 80’s: “``He has shown (people with disabilities) that life is worth living, and it doesn't matter whether you're in a wheelchair or a bed; it's what's going on in your mind and your soul that is important.''...

You can, of course, buy your own copy of Under the Eye of the Clock. And you may also consider Nolan's The Banyan Tree and his book of poems, Dam-Burst of Dreams.
Posted by DH at 11:57 AM