Is There A Bit of "Freedom Fever" Breaking Out in Russia? 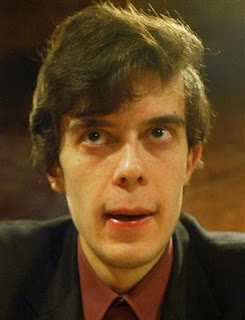 Brian Whitmore posted an encouraging article earlier this month, "Russia's Unlikely Rebels," over at The Power Vertical, one of the new blogs hosted by Radio Free Europe/Radio Liberty. (The blog features updates on Russian politics and insightful commentary from Mr. Whitmore and Robert Coalson.)

"Russia's Unlikely Rebels" described the trial of political dissident Roman Dobrokhotov (photo at left) stemming from police charges of Dobrokhotov's "provocative behavior" and "public cursing." The charges were outrageously unjust. (Yes, this is Russia.) But the trial itself was anything but business as usual.

Indeed, combining it with a few other hopeful signs, the unexpected outcome of Dobrokhotov's trial leaves Whitmore wondering if perhaps another breath of fresh air (and freedom) may be breezing through Russia.

Here's excerpts from the article:

...On January 31, police detained political activist Roman Dobrokhotov after he staged a silent protest in front of the Russian government headquarters in Moscow. Dobrokhotov, the leader of the opposition group We, stood with several colleagues in front of the White House with their mouths taped shut and holding blank sheets of paper. He was charged with "provocative behavior" and -- despite the tape -- "public cursing."

He was one of dozens of opposition figures detained in the Russian capital following a series of protests dubbed the "Day of Dissent" by organizers. But when Dobrokhotov's case was brought before Judge Aleksei Bondarev, something remarkable happened. Here's how the weekly "Novaya gazeta" described the proceedings:

"First of all, the session on February 3 lasted until late in the evening, and, as a rule, judges tend not stand on ceremony with political detainees. Second, the judge listened attentively to defense witnesses and said that since the police officers were an interested party, their testimony should not be trusted implicitly (ordinarily, the texts of judicial rulings repeat the police protocols almost word for word). Third, the judge entered into the record a videotape on which it is visible that the opposition figure had conducted himself decently, and recognized his right to free expression as protected by the European Convention. In the end, Aleksei Bondarev set aside the ruling of the Justice of the Peace and freed Roman Dobrokhotov in the courtroom. 'I do not know what will come of all this,' Bondarev said"...

And it isn't just in the courtroom where cracks in Russia's authoritarian structures are beginning to become manifest. At a press conference on Monday, Igor Yurgens director of the Institute of Contemporary Development and a aide to Russian President Dmitry Medvedev, said the following, according to a report in "The New York Times": "The social contract consisted of limiting of civil rights in exchange for economic well-being. At the current moment, economic well-being is shrinking. Correspondingly, civil rights should expand. It’s just simple logic."...

This blog has paid a lot of attention to machinations at the very top of Russia's power elite. We've been speculating about whether Medvedev's recent overtures -- like his meeting with "Novaya gazeta" editor Dmitry Muratov or his moves to scuttle a law broadening the definition of treason and espionage -- are signs of a thaw. We've been debating until we're blue in the face whether a split is emerging between Medvedev and Prime Minister Vladimir Putin, Russia's de facto ruler.

But we've also noticed another pattern that is hard to ignore. The protests over a hike in auto-import tariffs brought people who would never have considered protesting before out on to the streets. Anna Bukovskaya, an activist from the Kremlin youth group "Nashi," came forward to blow the whistle on how the authorities have been infiltrating and spying on opposition groups. Military officers are openly opposing a proposed reform of the armed forces.

These, even when considered together with Judge Bondarev's ruling and Igor Yurgens's frank statements, don't necessarily constitute a trend. At least not yet. But they do seem to suggest that Russians from various walks of life are beginning to lose their fear of dissent.
Posted by DH at 11:11 AM