Image Adjustment: Updates from the Culture Wars of Great Britain 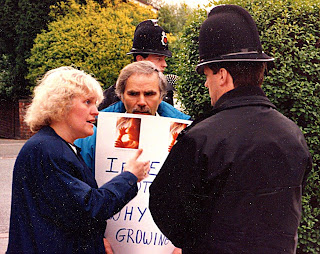 The latest newsletter from our dear friends working with Great Britain's evangelical pro-life organization, IMAGE, is not yet on their terrific website. But, hold on; it soon will be. In the meanwhile, I've decided to give you a peek at some of the items in their "Latest News" section.

Twenty-one girls under 16 become pregnant each day in Britain. On average, 12 of them have an abortion, according to the Department for Children, Schools and Families. David Paton, professor of industrial economics at Nottingham University Business School, said conception rates for under-16s had remained unchanged while abortion figures had risen. The figures were more evidence that the Government’s efforts to cut teenage pregnancy rates by provision of contraception and the morning-after pill without parents’ knowledge had not worked.

Ann Furedi, chief executive of the British Pregnancy Advisory Service, said she does not believe unborn human life has the same value as born human life. For her, she said, the question was not when does human life begin but when does human life really begin to matter, and that could be relative to the woman who was carrying it. The person who made a decision about the future of an unwanted pregnancy should be the person closest to the issue and most affected by it.

At 20 weeks, Leanne Shields was told her baby was not developing properly and would be born with severe disabilities. She decided that whatever happened, her baby would have every chance of life. He was born at 29 weeks weighing 1lb 6oz, spent 10 weeks in hospital, and has just celebrated his first birthday at home in Basildon, Essex – a picture of health.

The Sex Education Forum, which describes itself as the national authority on sex and relationships education, says clinics offering pregnancy tests and the morning-after pill should be available in every secondary school. This is despite its own admission that there is a lack of evidence showing that school-based clinics are effective.

Schools across Wiltshire have introduced drop-in sessions to provide pupils as young as 11 with the morning-after pill, contraceptives and pregnancy tests without parents’ knowledge. Swindon Borough Council officials said nurses would encourage children to talk to family members, but were themselves forbidden to discuss pupils’ visits to the sessions with anyone, including parents or carers. They said young people “have a right” to practise safe sex.

Kai Purdy was diagnosed before birth as having a life-threatening heart condition and Edwards syndrome, a genetic disorder which is normally fatal. His parents, from Scunthorpe, twice refused recommendations to abort him. After birth, he was found not to have Edwards syndrome and the heart condition corrected itself. “I am so glad we stuck by our guns,” said his mother.

In his book Against Physician Assisted Suicide, palliative care specialist Dr David Jeffrey tells of a former Army instructor who had terminal cancer and was determined to commit suicide. After a discussion with a doctor, it emerged that he was missing the Army. He was taken to watch a passing-out parade of young recruits, where a party had been arranged in his honour. “His life was transformed,” said Dr Jeffrey. “He had a purpose and his demeanour completely changed. He died two weeks later, comfortably. People’s lives always have that potential. Even in the midst of suffering there can be change. “You just don’t know what will happen.”

A film with Julie Walters as Anne Turner, the retired English doctor who committed assisted suicide at a Swiss suicide clinic, was shown on BBC TV the night before a Commons vote on the Coroners and Justice Bill, which could affect the law on assisted suicide. A BBC spokesman said he was unaware that the BBC scheduled the film to coincide with a parliamentary matter.

GPs are to be paid bonuses for persuading teenagers to have long-lasting contraceptive injections and implants. They are to be paid every time they give a teenager advice on sexual health, particularly on long-acting contraception. They may do this without parents’ knowledge. The Government says many teenagers fail to take the pill regularly or use condoms properly and that an injection or coil would better prevent teenage pregnancies. Family campaigners said long-lasting contraceptives would promote promiscuity and increase sexually transmitted infections.
Posted by DH at 12:50 PM