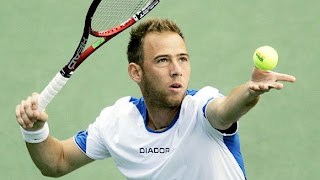 In a story that is being regrettably ignored by almost all of the Western press, the forces of Muslim intolerance and the penchant of radical Muslims to threaten (and then use) violence has claimed an important victory in the world of sports.

It has been decreed by 5 left-wing bureaucrats in the city council of Malmö that the upcoming Davis Cup tennis match between Sweden and Israel be played -- but without any spectators at all!

That's right. Because of threats from Muslims and a few of their anti-Israel pals, these 5 council members have defied contrary opinions by police, by other city council members, by Davis Cup officials, and by many other Swedish politicians and civil authorities and ordered the tennis match to be played behind closed doors.

Therefore, whatever the outcome of the tennis match itself, the serious losers here are freedom, democracy and the rule of law. And the winners? Islamic terrorism and those cowardly politicians who bow before it rather than fight back.

Here's the sad details from one of the few places they're available, The Local, Sweden's News in English.