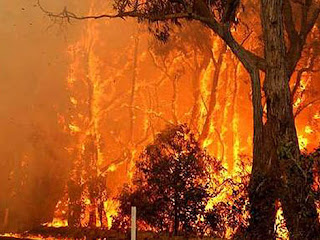 Not only are the wild environmentalists refusing to admit their part in Australia's bushfire horrors, their stupid insistence on maintaining dangerously dumb eco-policies are still keeping people in harm's way.

"Hazard reduction burning" is the careful, scientific-applied safety policy in which prescribed areas of brush and forest are "lightly burned" at intervals of 5-7 years to reduce the build up of highly flammable elements at ground level. It is a process which not only lessens the threat to people, but it is a proven measure to stimulate the healthy growth of the flora and fauna as well.

Miranda Devine writes in the Sydney Morning Herald, "This reduction of fuel loads is expensive, but Australia's pre-eminent bushfire researchers, such as the CSIRO's Phil Cheney and Monash University's David Packam, say it has been proven to reduce the power and intensity of fire. Every bushfire inquiry since the 1939 Stretton royal commission has recommended increased prescribed burning to mitigate the effects of inevitable wildfire.

It is a matter of public record that green groups have long opposed such systematic prescribed burning, as is evident in their submissions to bushfire inquiries from as far back as 1992. They complain of a threat to biodiversity, including to fungi, from "frequent burning" regimes and urge resources be spent on water bombers and early detection, as well as on stopping climate change - good luck with that..."

Devine then goes on to describe how "green activists," even in the wake of the tragic deaths of so many Australians in the bushfires, continue to act against "hazard reduction burning."

Amazing, isn't it? To the pantheistic dolts of the modern green movement, fungi trumps folks.

Teddy Roosevelt is turning over in his grave.

But wait; there's more of this inanity afoot.

...Frustrated volunteer firefighters yesterday lashed out at bureaucrats and greenies for preventing them from protecting communities...

Deputy Captain George Bennett said firefighters were so frustrated by bureaucratic hurdles they were finding legal ways to complete small burns "undercover" on private property. He said it took some brigades 12 months to gain approval for hazard reductions. The RFS admitted one burn-off on Mona Vale Rd in Sydney recently took several years to be approved.

"There is very little hazard reduction happening because of the bureaucratic processes, quite often it gets to the stage where brigades don't do it because of the paperwork," Mr Bennett said. "We have got a very, very dangerous situation looming here. There are no areas you could use for fire containment, we have got a situation where there is an enormous build-up of fuel. It will be frightening if we get harsh conditions in October..."

A firefighter from a brigade in northern NSW, who declined to be named, said his firefighters had stopped asking to do burns: "We don't bother doing it any more, it takes up to 12 months, you are only allowed to go and put fires out."

The RFS admitted yesterday they were sometimes told by the National Parks and Wildlife Service to move their planned burns to avoid disturbing colonies of endangered animals..
Posted by DH at 10:43 AM