"Abortion? Did He Say Something About Abortion?" -- Pelosi's Spin On Meeting the Pope 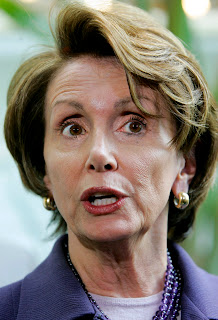 As predicted here yesterday, Speakstress Nancy Pelosi finally came up with her own spin about her meeting with Pope Benedict XVI. And, not surprising, Pelosi's synopsis of their conversation omits altogether the central point in the Vatican's version; namely, Pelosi's refusal to submit to Catholic teaching on abortion.

Pelosi's press release was so glaringly deficient on this point that George Weigel over at NRO's The Corner asks, "Were Benedict XVI and Nancy Pelosi in the same meeting, or even in the same city, this morning?"

Weigel continues, "Charity requires that one concede the possibility that genuine piety was a part of Pelosi’s (rather boorish, and certainly irregular) insistence on being given a private moment with the pope during her current taxpayer-funded junket to Rome. But her office’s statement on today’s meeting makes it clear something else was afoot: that Pelosi, who shamelessly trumpets her 'ardent' Catholicism while leading congressional Democrats in a continuing assault on what the Catholic Church regards as the inalienable human rights of the unborn, was trying to recruit Benedict XVI ('Joseph Ratzinger, D., Bavaria'?) to Team Nancy.