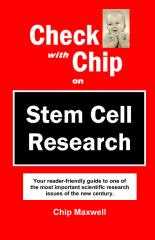 The Hartford living room was bright with a glowing fire and spirited conversation last Monday night as the Maleks (John & Barb), the Nelsons (Allen & Cindy), Matt Troutman, Chet Thomas, Karla Struble, and Claire and I gathered for Vital Signs Ministries' latest Book It! discussion. The book we had read was the brief (but intellectually bounteous) Check with Chip on Stem Cell Research by lawyer, former Nebraska state senator and Douglas County commissioner, and now Executive Director of the Nebraska Coalition for Ethical Research, Chip Maxwell.

I gave a brief description of the book when I recommended it back in September here on Vital Signs Blog but let me add here that Monday night's discussion certainly proved it to be every bit as valuable and provocative as I forecast.

Chip Maxwell is a gifted communicator: concise, clear, authoritative, engaging and witty. And he's courageously forthright (an increasingly rare virtue among conservatives) because he knows the scientific facts back up his case.

Most important of all, what Chip does in this 96-page book is skillfully break down the jargon and the hype which so often surround the issue of stem cell research and, instead, presents the issues in a careful, easy to understand way. And everyone agreed the other night, he does it very well indeed.

The format he uses to accomplish this is that of a radio broadcast (Chip hosted a call-in radio show here in Omaha where he dealt with such subjects) and this approach allows him to show how the case against embryonic stem cell and for adult stem cell research (both critically important) can be effectively, relevantly presented by anyone. Yes, anyone. You don't have to be a scientist to understand these things nor do you have to be a Perry Mason to refute the arguments coming from the other side.

But you do have to get the basic facts down. (That's easier than what you might think.) And then it's also good to pick up tips from as able a communicator as Chip Maxwell. That's why all nine of us at the Book It! discussion the other night enthusiastically endorse for your reading Check with Chip on Stem Cell Research.

And the next in line for the Book It! series? Ann Coulter's Guilty: Liberal "Victims" and Their Assault on America. The discussion will take place on the second Monday evening in March. If you'd like to be a part, terrific. Read the book and zip us a line at vitalsigns@vitalsignsministries.org
Posted by DH at 5:08 AM