Calmly Discussing Who Should Be Killed 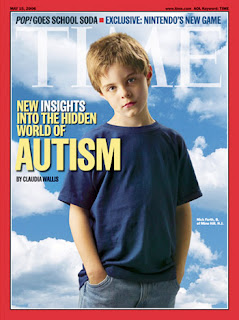 BioEdge has a most disturbing post here about the debate in England over aborting autistic children. Check it out.

What should happen when a prenatal test for autism becomes available? No doubt doctors would recommend that children who tested positive in the womb should be terminated. However, points out Professor Simon Baron-Cohen, of Cambridge University, "as you move to the extremes of mathematical excellence, autism becomes more common." "Would we also reduce the number of future great mathematicians?"

He concludes, in a talk given on the BBC, that "Caution is needed before scientists embrace prenatal testing so that we do not inadvertently repeat the history of eugenics or inadvertently 'cure' not just autism but the associated talents that are not in need of treatment."

"Screening for Down's syndrome has become commonplace; a test for autism is imminent. There is no doubt that more and more tests will be found for more and more conditions, many of them far less life-threatening or seriously affecting quality of life than the ones we now give priority to. Where would we stop in offering pregnant women tests?"

Another log was tossed on the fire of the debate with the publication of a biography of "the greatest British physicist since Newton", Paul Dirac. Apparently, claims Graham Farmelo, in his book "The Strangest Man", Dirac had many characteristic features of autism. However, he went on to become, at 29, the youngest physicist ever to win a Nobel Prize. And despite his eccentricities, he was married to the same woman for 50 years.

Charlotte Moore, also writing in the Guardian, said that aborting autistic children was unwise – even though she had aborted her first child because he was deformed. "Autism also means unique perceptions, special talents, weird humour, a view of the world untainted by greed, envy, malice, vanity, ambition. Our family life is as rich and as meaningful as any other; my sons' lives are not tragic, and nor is mine. A society that aims to remove all the variables that make human life so fascinatingly complex is not a society I want to live in." Ms Moore has recently published a book on her life as the mother of two autistic sons, "George and Sam".
Posted by DH at 5:20 AM