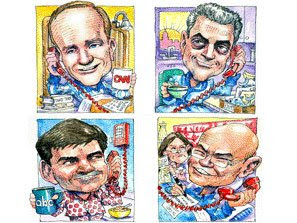 Warner Todd Huston has an enlightening (though hardly surprising) "media bias alert" for us over on NewsBusters.

"Politico reports that White House Chief of Staff Rahm Emanuel holds daily chit chat sessions with several Old Media pals every morning to start his day. Apparently Emanuel has for years been involved with daily bull sessions to plan media coverage and ideological strategy with CNN's James Carville and Paul Begala, as well as ABC's George Stephanopoulos, with the occasional participation of pollster Stan Greenberg. But there is one little problem with this daily palling around with mediots these days: Emanuel now works for the White House. [Image credit: politico.com]

As Politico's John Harris notes, "in any given news cycle, it is quite likely that Washington’s prevailing political and media interpretation -- at least on the Democratic side -- is being hatched on these calls." In light of this early morning scheming, one has to wonder where the supposed autonomy of the media is if they are being programed by the Obama White House in off the record, secret and daily conversations? Where is their objectivity if these media mavens are all assisting Emanuel mold and shape the news to further a specific ideological goal?..."

Read the rest of Huston's report, including the ironic contrast between this coziness and the way the MSM responded to the idea of the Pentagon briefing journalists who covered military affairs.

(The clever cartoon is from the NewsBusters story too.)
Posted by DH at 10:26 AM