"Dictators Are Making a Comeback" 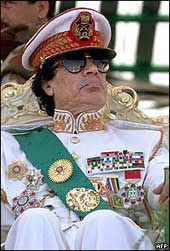 Claudia Rosett has a terrific, hard-hitting piece in Forbes that reminds us that our problems are a lot more than economic.

Dictators are making a comeback.

Just four or five years ago, the headlines were full of democratic movements, notably the yellow, rose and cedar "revolutions" in the Ukraine, Georgia and Lebanon. The Taliban had been toppled, Saddam Hussein overthrown. Democratic stirrings were heralded from the streets of Iran and China to promises of reform in Saudi Arabia and Libya. Freedom was continuing a roll begun way back in the Reagan era. Tyrants were on the outs with polite society.

These days, dictators are on a roll. Among the many signs was last week's op-ed in The New York Times by none other than Muammar Qaddafi, unrepentant and brutal tyrant in Tripoli for the past 40 years--though, for the purposes of this piece, the Times identifies him politely as "the leader of Libya." I am still pondering that article, and not solely because this is the same New York Times that last fall rejected an op-ed by John McCain when he was running for president. Qaddafi used his patch of American editorial space to float a plan that would demographically blitz democratic Israel out of existence by setting up a single combined Palestinian-Israeli state, which he suggests we call "Isratine."

It's tempting simply to dismiss such stuff as unintended self-parody--whether on the part of Qaddafi, the Times or both. But it is also a token that tyrants are back in style, not only feeling safe to venture out of their spider holes but preening as elder statesmen and increasingly welcomed back to the parlors, editorial pages and negotiating tables of democratic high society.

Earlier this month, New York-based Freedom House reported that for the third straight year, freedom around the globe is, on balance, in retreat. In most of the former Soviet Union, this continues "a decade-long trend of regression." In the Middle East, apart from improvements in Iraq, stagnation is the word. The brightest spot is South Asia, which saw improvements in Pakistan, the Maldives and Bhutan. But looming over that landscape is China, which "increased repression instead of delivering human rights reforms pledged in connection to hosting the Olympics." Latin America and Africa registered net declines.

The basic cause for concern is not that there are more dictatorships than a few years ago, but that the global ethos has shifted. There is a growing swagger among despots...

The rest of the article (and it definitely should be read in full) is here.
Posted by DH at 10:36 AM