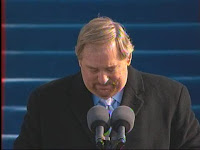 If you didn't watch the inauguration, you may be wondering about how the invocation of Rick Warren went. Here it is.

Reverend Warren made no reference to the unborn, to the holocaust of abortion, to the devastation of sexual aberrations or anything else that might be deemed controversial.

Except praying in the name of Jesus which he did and for which I commend him.

But Warren should have taken this unprecedented opportunity to speak truth to power. He did not and that's a shame.

And, while I'm at it, also shameful was this silly, sycophantic line in his prayer, "And we know today that Dr. King and a great cloud of witnesses are shouting in Heaven."

Really? Are you so certain, Reverend Warren, that the election of a non-Christian who aggressively supports abortion delighted heaven? (Obama praised Roe v Wade and declared again his desire for unrestricted "freedom of choice" the very day after Warren's invocation).

Were the angels and saints applauding simply because of the new President's racial makeup? If you think so, Reverend Warren, your values are anything but biblical ones.

And if you don't really believe that, then why so severely distort Christianity in order to play to the crowd?

It was a very disappointing moment.
Posted by DH at 5:27 AM