Next in Line for Federal Bailout -- The State of Illinois? 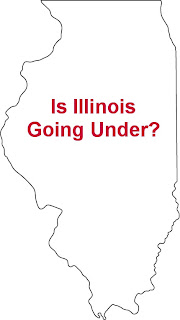 Barack Obama's state of Illinois is in big, big trouble. Already looking at a budget deficit of more than $2.5 billion, its backlog of unpaid bills is $4 billion right now and will be $5 billion before the flowers bloom. Yipes.

Hey, Democrats, these are your people, the ones you supposedly care the most about. Hey, Democrats, the people running the state are yours too. But you keep putting them back into office year after year, despite their incompetence, petty quarreling and whatever else occupies their wee minds. The only one of them doing a good job is Hynes, whose latest warning should make everyone wonder: If our economy is in such a mess, and our 401(k)s have gone to pot, and the federal government is setting stratospheric records for borrowing, and no one is making loans, then how will Illinois ever get out of this mess?...

Frankly, I don't know what can be done. Hynes recommends urgent short-term borrowing that will keep suppliers going for now. He also wants some form of federal aid, such as paying the state its Medicaid reimbursement before services are provided (in effect, turning reimbursements into advances). He also wants the state to eliminate "Catch 25" (actually Section 25 of the Illinois Finance Act), which requires the state to pay all its bills in the same fiscal year in which they were incurred, with a few exceptions, such as Medicaid. This is a giant loophole that allows the state to push the huge pile of unpaid Medicaid bills into the next fiscal year, and use the money that should have been set aside for Medicaid for other purposes, so that the state budget (fraudulently) looks in better shape than it actually is.

I'm not sure how well any of that will work; it might already be too late. Who would lend Illinois money in its current financial condition? How can we count on the federal government for help when it is borrowing every dollar in sight for its assorted bailouts, mortgage purchases, bank and financial institution assistance and impending auto industry loans coming to more than $1 trillion?

Oh, that's right. In Washington, the answer to any problem is to borrow more. And more. Look for Washington to pull Illinois out of the fire and let us cheer all the taxpayers in the other 49 states.
Posted by DH at 10:15 AM