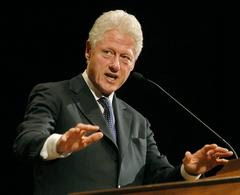 Here's an infuriating tidbit that the mainstream media has (hmm...conveniently for Democrats) refused to disclose.

Four major banks, including one that collapsed, two that received federal bailout money and one that filed for bankruptcy this past September, paid former President Clinton $2.1 million for 13 speeches he delivered on their behalf between 2004-2007, according to Senate financial disclosure statements filed by Sen. Hillary Clinton (D-N.Y.)....

The facts and figures are in this CNS News report.
Posted by DH at 9:54 AM