Just in Time for Winter: A New Cold War 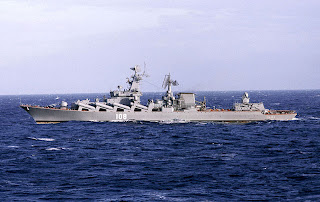 This is where timidity, unpreparedness and weakness leads.

Russian warships sailed into port in Venezuela on Tuesday in a show of strength as Moscow seeks to counter U.S. influence in Latin America. Russia's first such deployment in the Caribbean since the Cold War is timed to coincide with President Dmitry Medvedev's visit to Venezuela, the first ever by a Russian president.

Russian sailors dressed in black-and-white uniforms lined up along the bow of the destroyer Admiral Chabanenko as it docked in La Guaira, near Caracas, and Venezuelan troops greeted them with cannons in a 21-gun salute. Two support vessels also docked, and the nuclear-powered cruiser Peter the Great, Russia's largest navy ship, anchored offshore.

Chavez, basking in the support of a powerful ally and traditional U.S. rival, wants Russian help to build a nuclear reactor, invest in oil and natural gas projects and bolster his leftist opposition to U.S. influence in the region.

He also wants weapons - Venezuela has bought more than $4 billion in Russian arms, including Sukhoi fighter jets, helicopters and 100,000 Kalashnikov rifles, and more deals for Russian tanks or other weaponry may be discussed after Medvedev arrives Wednesday...
Posted by DH at 10:40 AM