That Non-Existent War on Christmas Is Back 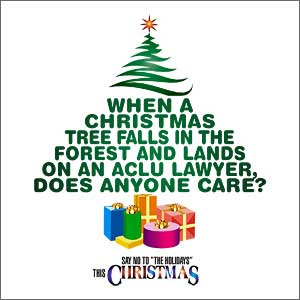 We hear it every year from the news media and other liberals. "There is no war on Christmas. It's all in the intolerant imaginations of paranoid Christians."

But all the while, the evidence for that war piles up. And up. And up.

Here's one of the first of what I have no doubt will many reports in this "Winter Solstice" season. It's a story of how Florida Gulf Coast University has prohibited all holiday decorations from the common spaces on campus. But that's not all. They've also canceled a popular Christmas card design contest (they're trying to institute an ugly sweater competition to take its place -- there's a sermon illustration for you) and the school's traditional Christmas tree has been altered into a "giving garden."

"Public institutions, including FGCU, often struggle with how best to observe the season in ways that honor and respect all traditions," President Wilson Bradshaw wrote in a memo to faculty and staff Thursday. Hmm. It seems that the one tradition (indeed, the one behind it all) isn't being very honored or respected at all.

Like always in these situations, the high-handed actions of the Scrooge-in-question are ticking people off. For instance, the Staff Advisory Council received 44 anonymous comments after the president's memo. And every one of them opposed Grinch Bradshaw's move.

Junior Marilyn Lerner, a 20-year-old resort and hospitality management major from California, said she'll miss seeing Christmas trees in the Student Union. "I think they're pretty," said Lerner, who is Jewish. "It's just a Christmas tree. I don't mind."
Posted by DH at 10:13 AM