Memo to the Media: The New Cuba is the Old Cuba 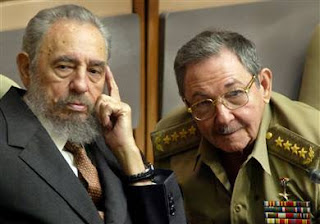 The Cuban Democratic Directorate reports just one example of the ongoing mistreatment of political prisoners in Cuba. The original post (in Spanish) is here but an English translation is provided by The Real Cuba.

Political prisoner José Daniel Ferrer García, held at Guantánamo Provincial Prison, was attacked by a guard as he attempted to give a firsthand report on prison conditions to activist Juan Carlos González Leiva. The guard attempted to cut the prisoner’s telephone connection, producing a confrontation during which Ferrer shouted slogans against Castro and the dictatorship and in favor of freedom for Cuba. The connection was abruptly cut off.

Ferrer García subsequently managed to reestablish communication and explained what had happened: “They took the telephone from my hands by force, they started to twist my arms around my back. They twisted them in such a way that my wrists are… and great pain in my shoulders. They nearly stuck my twisted arms to the nape of my neck. Then they threw me to the ground and dragged me all along the ground in that position. I do not know how my arms did not break.”

Ferrer García added that they had taken him to the prison’s command office, and that he was subsequently able to return to the telephone. Just as he was explaining to González Leiva what had happened, he was once again interrupted by the same guard, who abruptly cut the connection. Before they forced him away from the telephone, Ferrer García said that if he were not allowed to use the telephone, he would become a 'plantado," referring to those political prisoners who assume a rebellious and absolutely uncooperative attitude in protest.

"If there is another issue with the telephone, there will be no understanding. I will begin my protest anew then. Juan Carlos, are you listening to me? I will call you in 10 minutes. If I do not call you, José Daniel is in solitary confinement or José Daniel was beaten to death, because as long as José Daniel is capable of thinking, no one will violate his rights.”
Posted by DH at 9:51 AM