Drunk Driver Sorry After the Fact 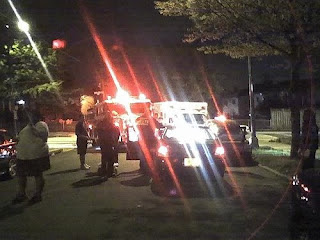 It's a classic case of hypocrisy, except that in this case several person's lives were at stake.

A 22-year old man gets so agitated and angry because he believes firemen are not acting quickly enough to free his injured mother from a car crash that he ends up taking a swing at one of the firefighters and has to be taken to the ground and restrained there until police arrive to take over.

But the circumstances of the crash reveal that the young man doesn't really care about his mother's safety at all. For he was the driver -- the drunk driver -- who caused the accident in the first place. His mother's endangerment (she was taken to the hospital in extremely critical condition) was all his own fault. As was the endangerment of everybody else on the road, including the other two passengers in his vehicle (women, ages 55 and 20) who were also hospitalized in serious condition.

So where was the young man's "concern" for his mother's safety when he climbed behind the wheel drunk? Where was it when he raced along narrow suburban streets at high rates of speed? Or when he tried to pass another vehicle, losing control and crashing into several parked cars?

The man was eventually charged with DUI, negligent driving, failure to display a driver's license, operating with no insurance, and having no valid vehicle registration.

A Chicago Fire Department spokesman said the drunk driver eventually apologized to firefighters and the Department decided not to press further charges of their own. "He said he was sorry," the CFD spokesman said.

Yeah, they're always sorry...after the terrible damage is done.
Posted by DH at 9:59 AM