California Isn't As Green As It Claims 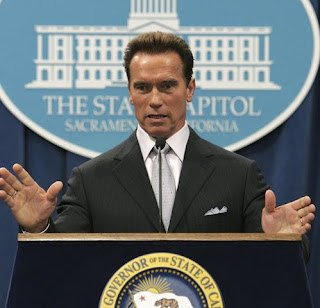 In January 2007, Governor Arnold Schwarzenegger stood before the California legislature in Sacramento and delivered his fourth State of the State address since his improbable 2003 election. It was a rhetorical tour de force that would win him widespread acclaim. “California has the ideas of Athens and the power of Sparta,” said Schwarzenegger. “Not only can we lead California into the future; we can show the nation and the world how to get there.”

Schwarzenegger especially celebrated California for its leadership on energy and the environment. Just three months earlier, he had signed the Global Warming Solutions Act, committing California to reducing greenhouse-gas emissions to 1990 levels—roughly 25 percent below today’s—by 2020, and all but eliminating them by 2050. The Governator then lambasted the Bush administration for failing to tackle global warming: “It would not act, so California did. California has taken the leadership in moving the entire country beyond debate and denial to action.” Such performances have helped establish Schwarzenegger as a national figure, even a statesman, on the environment. In April 2007, he posed for the cover of Newsweek, spinning a globe on his finger under the banner leadership & the environment, and in September, he even addressed the United Nations on climate change.

Schwarzenegger’s reputation as an environmental trailblazer is in keeping with California’s recent history and self-perception. California’s political leaders, business titans, academics, and environmental activists proudly point to the fact that the state has infused its public policy over the last four decades with an environmental consciousness unmatched in the United States, while also maintaining a dynamic economy, arguably the eighth-largest on the planet, with a gross state product of more than $1.6 trillion. The widely shared assumption is that forward-looking Athenian wisdom has nourished awesome Spartan power.

In truth, however, the Golden State’s energy leadership is a mirage. California’s environmental policies have made it heavily dependent on other states for power; generated some of the highest, business-crippling energy costs in the country; and left it vulnerable to periodic electricity shortages. Its economic growth has occurred not because of, but despite, those policies, which would be disastrous if extended to the rest of the country...