Why Doesn't the Vatican Speak Out Against Castro? 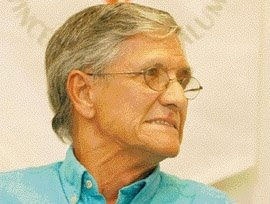 One of the topics that most certainly should have been the focus of last week's discussions between President Bush and Pope Benedict XVI is Cuba. But even if the sad plight of that country was examined, Armando Valladares (photo at left) has some grave concerns about just what solutions the pontiff may have proposed. Valladares knows Cuba -- he suffered for 22 years in Cuban's cruel and unjust political prisons -- and he respectfully challenges the serious errors the Vatican has taken in its response to Castro's oppressive rule.

Last week Valladares wrote a compelling article for the Wall Street Journal, reminding readers of the true nature of the Castro (Fidel or Raul) regime. Among the salient points were these:

The Catholic Church has taken a hardline position against right-wing dictatorships. But in Cuba, the Church has been silent – or worse – ever since 1960, when Fidel Castro expelled hundreds of Catholic priests because they alerted their parishioners of the communist danger surfacing in government circles.

In one especially shameful episode in the 1980s, Ventura, Cipriano and Eugenio García Marín and their mother entered the nunciature in Havana to ask for political asylum. Two days later they saw several priests get out of a black limousine. They were special troops from Castro's political police who entered the Holy See's diplomatic mission with the authorization and complicity of the pope's diplomats in Havana. The three brothers were executed, and their mother was sentenced to 20 years in prison.

Cardinal Tarsicio Bertone's visit to Cuba this February was a different kind of outrage. In statements by the Vatican secretary of state, published by L'Osservatore Romano shortly after the cardinal's visit, the cardinal is quoted saying, contrary to historical fact, that Cuba's Catholic Church is not a "persecuted Church." He also described Cuba's universities as "renowned centers of higher education." In reality, they are sophisticated factories of atheism and apostasy.

The cardinal also said: "As we all know, Cuba's crucial problems are due to the embargo imposed by the U.S. and the economic sanctions of the European Union which slow down its development." The Vatican's chief diplomat appears to have forgotten that for almost 50 years the "crucial problem" of Cuba has been the communist regime...

The Vatican's diplomatic behavior helps prolong the agony of my sisters and brothers in Cuba, and creates a grave problem of conscience for loyal Cuban Catholics who expect better from the pope. It in no way diminishes their veneration to express respectful disappointment and even disagreement with the Vatican.

I pray that future developments will prove wrong the concerns of so many Cuban Catholics on the island and in exile. Both the pope and President Bush have immense responsibilities before God and the Cuban people. It is my most sincere hope that they will not forget Cubans' aspirations for freedom, peace and prosperity. 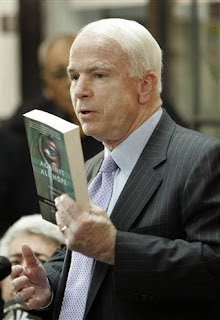 Armando Valladares is now chairman of the New York-based Human Rights Foundation. He has also has served as U.S. Representative before the United Nations Commission on Human Rights from 1987 to 1990. For a bit more on Valladares, check these posts from The Book Den: Viva Cristo Rey! Armando Valladares Recalls the Beginnings of True Faith and Against All Hope: A Quick Assessment. Also, this NewsMax article, "Armando Valladares: Human Rights Hero," is an excellent introduction to the man.

The AP photo at right shows John McCain holding up a copy of Valladres' book Against All Hope. It was given to him by the author last year when McCain was in Miami speaking at the Bay of Pigs Museum.
Posted by DH at 8:56 AM