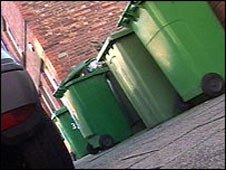 Okay, here's how silly (and pernicious) things get when the nanny state turns green.

This BBC report tells of a Cumbrian man given a criminal record and fined £110 for "overfilling" his wheelie dustbin by four inches. That the local trash men had reduced their collections from once a week to only twice a month didn't matter to the police, nor did the fact that the man's household includes 2 adults and four children. And though the family is into recycling, the Council-supplied bins just aren't large enough to hold the non-recyclable trash the family generates.

But the Council won't budge. Indeed, it insists that the new trash limits will be strictly administered...even if it means a forced restriction on citizen consumption.
Posted by DH at 8:24 AM