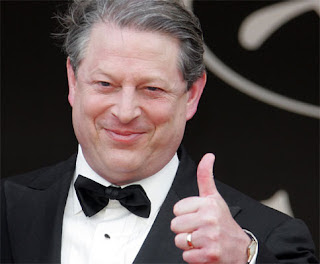 Clodagh Hartley, the Consumer Affairs Correspondent for the Sun (U.K.), caught Al Gore for an exclusive interview. Here's a few of the choice bits (with a few of my own comments sprinkled in):

"Al Gore wants to make a sequel to his Oscar-winning documentary on global warming – and despite Earth’s 'rising fever' he is still hopeful for a happy ending." But Gore is an exceptional fellow and he is capable of being very optimistic and very pessimistic in the same interview. For he also believes that "little has changed where it counts and the situation is even more urgent" than when he scored his Nobel Prize.

Doggone it. Though his Prize, his film and his ceaseless harping should have turned things rightside up by now, "Mr Gore – hailed as the world’s leading green campaigner – said recent polls had found that while people rate climate change as a 'serious problem', some ranked it lower than clearing up dog mess."

Gore went on to describe that global warming "can kill you" and yet it isn't getting the attention of the politicians or even the public. That's why he is so important. As Mr. Hartley puts it, Gore "reveals he no longer has his sights set on becoming a political leader. Instead, since losing the race for the White House to George W Bush in 2000, he has found 'a much more important job to do' – saving the planet."

Gore's plan, he tells Hartley, is to create a movement of 10,000,000 to force the United States to go green. Then, he's sure, other governments will follow. Like Great Britain. And China. And India.

In Gore's mind, such things as hard science, economic reality, and it seems even history aren't allowed to obstruct his visions. Thus this statement -- “When the U.S. does change on this issue it will have a tremendous impact on the rest of the world. It’s hard to imagine China and India changing their position if the United States does not. Those countries look to the U.S. as an excuse for not acting.” If Japan, Europe and the U.S. are moving in the right direction, “China will have a very difficult time moving in the opposite direction”.

Of course. China is so susceptible to outside influences.

Gore the scaremonger doesn't show up for most of the Sun interview, but there are moments like this one: “I have to say the situation has not improved since I made the movie in 2006. Sure, awareness has grown and more people are concerned since scientists said we had just ten years to take action to halt rising sea levels. But the situation has got worse. The entire North Polar ice cap is melting and could be gone in some areas in as little as five years."

But if the problems is so catastrophic, can an individual's choice of light bulbs make a difference? Sure, because such things then help commit the individual citizens into forcing their governments to make more massive change.

"So if it’s all down to governments, is there any point in people 'going green,'?" Hartley asks. "'Absolutely', [Gore] booms. 'I believe that while it’s important to change lightbulbs, it’s far more important to change laws. The idea that individuals in their own activities are going to change this is wrong. But when they do change they are likely to get behind the movement and that is very important because it is going to be changes in law that will ultimately solve this problem."

Big government forcing changes on us. Limits on freedom, initiative, ownership, the pursuit of happiness. This is the scariest element of Gore's grand scheme and why reading this Sun interview was a pretty disturbing piece of my morning.

To his credit, though, Hartley does begin to play the part of adversarial reporter later in the interview as he brings up the issues of hypocrisy and costs. Here is the section:

The man who is now as much part of the Hollywood Establishment as he was a political player with the Democratic Party is very careful not to upset any of his celebrity friends. He wouldn’t dream of suggesting that their lavish jet-setting and gas-guzzling lifestyles could be reined in for the good of the environment.

When we point out that David Beckham has recently been given the dubious title of having the worst carbon footprint in history – clocking up enough air miles to fly to the moon and owning 15 gas-guzzling cars, Mr Gore shifts uncomfortably in his seat.

He knows what is coming next.

When asked what he would say to the football icon – a hero to millions – about his impact on the environment, Mr Gore refuses to be drawn. He gives a huge belly-laugh at the notion that Posh and Becks could invest in an environmentally-friendly hybrid car such as a Toyota Prius. He careful considers his answer before saying: “I don’t think that’s my place. I don’t want to get into personally criticising anyone.”

And, oh yes, about those staggering costs of eco-consumerism? Gore feels for you, pal, but it's gotta' be done. After all, "the main benefit of people going green is that they will join a movement to pressure their governments.”

And that's where Al Gore comes in. For he knows that to achieve these crucial ends, "governments need constant pressure and that is what he will devote his life to."
Posted by DH at 10:45 AM