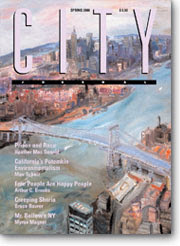 Peter Lawler, author, Professor of Government at Georgia's Berry College, and a member of the President’s Council on Bioethics, has written for City Journal a penetrating review of Embryo: A Defense of Human Life, by Robert P. George and Christopher Tollefsen (Doubleday). It is a fine piece, one that does admirably what a book review should do; namely, give an accurate evaluation of the book's theme and quality while also giving insight into the values and opinions of the reviewer.

Lawler likes the book a lot. He writes, "This stunningly able and very important book, I predict, will grow in influence." But he goes further to show just why he likes it: the philosophical penetration into Aristotle and Kant, the sound scientific foundations, the logical reasoning, the measured argument, and the courageous convictions of the authors to apply their conclusions to social policy.

In their bold new book...philosophers Robert P. George and Christopher Tollefsen defend the proposition that the embryo—the organism that comes into being as the result of fertilization, the union of sperm with oocyte—is in fact a human being. And that means that an embryo has “absolute rights.” An embryo should never be used as a means to pursue someone else’s ends, however laudable or life-saving, they say. Certainly, embryos shouldn’t be killed to assist frustrated parents attempting in vitro fertilization (IVF), or even to further pathbreaking medical research.

The authors stop well short of recommending all of the potential changes in law that would necessarily follow from their argument. All they ask is that scientific research that involves the killing of embryos be outlawed—or, at the very least, that it be denied public funding, and that future IVF procedures be practiced in such a way that they do not produce surplus embryos that are ultimately discarded. The authors oppose what they see as brutality motivated in part by good intentions—brutality they hope to correct with moral reasoning based in scientific knowledge. Open-minded readers should find their case powerful.

There are disagreements between Lawler and the authors of Embryo but they are stated cleanly and without ego. That too is always nice to find in a book review. Again, Dr. Lawler's engaging and very helpful review was published by City Journal and can be read in its entirety right here.
Posted by DH at 11:15 AM