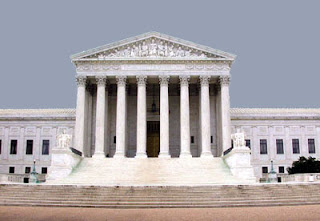 Everyone waxing outraged about the big Medellín decision yesterday is focusing on the death penalty, but the Supreme Court did something else entirely: It insulated American law from the international variety. And this modest and limited ruling should help restore those two qualities to U.S. courts, which is no doubt one of the reasons the Roberts Court's political opponents are so livid...

Devotees of using foreign law to overrule American politicians will squawk. But the Medellín majority has delivered a victory for legal modesty and the U.S. Constitution.

The above lines are the opening and closing paragraphs of the Wall Street Journal editorial about the José Ernesto Medellín case, a victory of major consequence in the battle to retain American sovereignty in law. Read the important WSJ commentary that comes between them right here.
Posted by DH at 8:55 AM