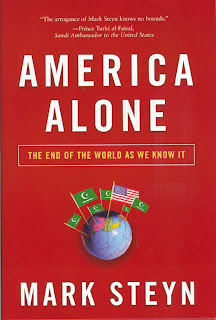 Here's news from Monsignor Vittorio Formenti at the Vatican that Islam has now surpassed Roman Catholicism as the largest single religious group in the world -- 19.2% percent of the world's population compared to 17.4% for Catholics.

But, more important for the impact on culture than the sheer numbers, is that an awful lot of those counted as Roman Catholics are not practicing the tenets of their "birth religion" at all.

Nor does Roman Catholicism (or Buddhism, Bahai or the Baptists, for that matter) include among their religious beliefs "honor killings," jihad, suicide bombings, death sentences for converts, evangelism by scimitar, and so on.

So, this news from the Vatican certainly isn't good news for Western civilization.

(Note: Let me add here a more direct recommendation of Steyn's America Alone. It is a superb book, timely, insightful and very challenging. Last week it was the focus of one of Vital Signs Ministries' Book It! discussions over here at our home with Quint, Matt, John, Keith, Chet, Claire and I participating. I'm sure they would all add their endorsement of America Alone to mine.)
Posted by DH at 8:41 AM